Syndicated comic authors have been complaining about newspaper size restrictions, content censoring and similar issues for a long time. Comic enthusiasts have been increasingly irritated by the treatment their entertainment medium receives as well. Then along came the Internet, providing unlimited and unrestricted distribution possibilities. Thus the webcomic was born.

There are millions of webcomics out there, dealing with such vast topics as video games, college life, samurai, Lego men, identity and self esteem, depression, suicide, children and joy. People write them for a living, for fun, as stress relief, for artistic expression, or often just for the hell of it. Then they stick their creations on the web and hope that just one more person will find and enjoy the fruits of their labour.

There seem to be several hundred new comics created each and every day. These often dwindle and fade after only a few months. Occasionally, however, a comic rises above the rest and gains such popularity that the creator is able to forgo all other work and scrape a living solely off the proceeds generated by their websites. Some examples of such are Penny-Arcade, PvP, CtrlAltDel and Squidi.net.

Many people, when introduced to the world of webcomics, think to themselves “Wouldn’t it be cool to have my own comic?” and a few go beyond this and create their own. So how can a newcomer ensure that their comic continues beyond the first few weeks of enthusiasm?

Now before I go into some useful tips it is probably worth noting that I am the proud owner of a failed webcomic. It went for a few months before hitting a few snags and then grinding into the ground. I have plans to return to creating the comics, but as of yet have not. So I’m not really drawing from a foundation of success, more of failure and an understanding of some of the main factors contributing to my failure.

For starters, you’re going to need to plan a little. It’s unfortunate, unfair and certainly not fun, but it is necessary. Sit down and think about your comic. Come up with a location setting, some characters and maybe even a few plots to test them in. Run the characters through some adventures and see how they react and how you react to them. Your characters will grow and change throughout this process, and continue to do so throughout the life of your comic but you need to get a handle on their basic character traits.

For some reason the majority of comics revolve around a group of people (usually guys) that are somewhat geeky and live together. Usually in a university dorm. I would imagine that this is because that’s the general life of the majority of webcomic authors. The premise itself also makes an awful lot of sense for the basis of a comic. When designing my own webcomic the process went a little something like this: I designed the main characters, most of which were drawings that I had been playing with since high school. Then I needed a reason for them to constantly see each other and interact, so I got them living together. They needed character traits that I could relate to, so they become university-aged students that had at least a passing interest in the geeky side of life.

I drew my first few strips and showed them to some friends, who liked them, so started looking into putting them online. The initial line up included two guys who lived together, a female love interest for one of the characters and a talking animal (in my case a frog, because I had this frog that I’d been drawing for years and had become quite attached to him).

At this point I wasn’t very experienced with webcomics, having only really read the syndicated newspaper comics that the syndicated press companies post online. So I started looking through some of the major comics, only to find that Sluggy Freelance had the talking animals, geeky guys that lived together and female love interest already covered. A bit more research revealed that the “university students living together” was covered in the large majority of comics. Furthermore, having a kind of wacky (and just a little stupid) character, and a more sensible and reserved one was practically a given. Then, to rub salt in the wound, I found that another comic had its main character design very similar to my own. So I got rid of the frog, removed the focus on gaming and university and otherwise left the comic as it was. Not entirely original.

Anyway, the point is that you should probably try to be more original. Check through your concept and remove the whole university students living together with wacky talking inappropriately anthropomorphic sidekicks. You’ll be better off in the long run and have a more original creation.

Before you jump headfirst into publishing your comics online, you should build up a bit of a backlog of comics. Try to draw at least ten or so quality comics that you would be proud to have on your site. If you’re going to have a story-based comic then it would be a good idea to plan your first story arc. It is really useful to maintain this backlog of comics whenever possible, so that you can fall behind in the creation of the comics but still have content to post online. Nothing turns away readers faster than failing to provide them with content when you say you will. If you eat into the backlog, try to draw a few extra strips so that it doesn’t get diminished.

As a helpful guide for your comics, decide roughly what format they will take (e.g. three or four panel gag strips etc.) and draw up the panels on your computer. You can then print these and draw the strips within the panels, ensuring that they stay neat and consistent. When the comics have been drawn, scan them into your computer and touch them up any way you like. It’s generally the best practice to remove speech balloons and text and add these on computer, because it will usually be neater and easier to read. Remember to fit balloons around the speech, not the speech into the balloons. It’s amazing how often this is forgotten. Some good fonts, free for non-commercial use, can be found at http://blambot.com. Don’t get too stressed about your artwork, I found that most people don’t mind slightly inconsistent and not overly fantastic artwork provided they enjoy the content of the comic.

So now you’re ready to get going with the online side of things. Start writing your web page so that you can just upload it when you’re ready. Webcomic PHP management systems are relatively easy to find. I personally really like ComicPro that, unfortunately, seems to have vanished from the web. If you can hunt it down it’s worth a look. Web hosting is quite easy to find as well, you won’t need much space to begin with so you can use one of the many free providers out there (including http://keenspace.com that provides free hosting specifically for webcomics), use the web space provided by the majority of ISPs or purchase your own web hosting plan (you can get a quite cheap one because you won’t be needing many features to begin with). When signing up for any hosting package, make sure you have permission to change the read/write attributes of your files because the PHP comic managers will need this (this is done on Linux servers using CHMOD from your FTP program; In Windows you can Right-Click a file, select Properties and change security permissions there; or you may need to use a proprietary control panel provided by the host).

You’re going to need to decide on an update schedule for your comic. It’s probably best to start small and build up; maybe two or three updates a week. This way you have three to five weeks of comics in your backlog, which allows you to fall behind substantially before anyone notices.

While we’re on the topic of deciding schedules, it will help you if you actually try and schedule an hour or so into your day to write comics. If you just try to fit them into the free time that you’re “bound to have just after you finish just this one last thing” then you’ll often find yourself failing to get a strip drawn on time.

Now that you have your comic online you can start promoting it. There are a huge number of comic directories out there that will help get you exposure. Get your friends excited about your comic and they in turn will get their friends excited. Read other people’s comics and get involved in their forums. Find sites that accept guest artwork or comics and send some to them. The best promotion comes from getting people to read your comic and fire a link across their instant messenger program to another friend. My current list of “must read every day” comics came entirely from various people sending links to me. Don’t expect instant success, look to sharing your vision with even just one new person every day.

Well, I hope that helps to give you a few ideas about how to make your comic and keep it running. When your characters start to grow they’ll almost create the stories and jokes themselves and the strip won’t be anywhere near as hard to write as it was when you first started out. Just keep drawing the comics on a frequent basis so that you don’t fall out of the rhythm of your created world and above all else have fun. 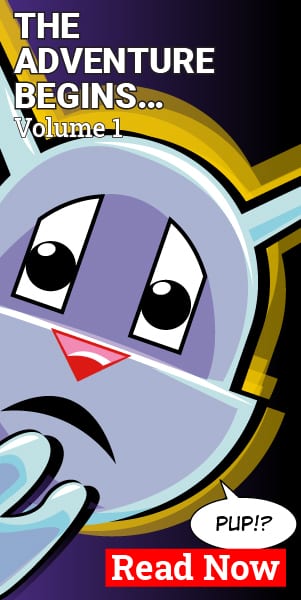